Beyond Caste: Identity and Power in South Asia, Past and Present, by Sumit Guha: a Review 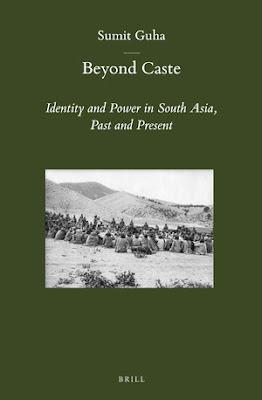 Firstly, I think he makes too much of ranking. That is, he seems to follow the standard idea that all the castes in a society are in a clear hierarchy relative to each other. He quotes Weber: “A status segregation grown into a ‘caste’ differs in its structure from a more ‘ethnic’ segregation: the caste structure transforms the horizontal and unconnected coexistences of ethnically segregated groups into a vertical social system of super- and subordination” (13).

As I demonstrated in my work, with the exception of Dalits (those formerly known to others as Untouchables) and, to a lesser extent, other impure, but not untouchable castes, such as Butchers, those vertical relations are often contested and indeterminate because of no ritual intercaste relations. Guha does acknowledge, at least, that ethnic boundaries are porous.

Secondly, although Guha examines caste throughout traditional India (including the territories now Pakistan and Bangladesh), dividing it helpfully into five regions, and makes several references to caste in Sri Lanka, he barely mentions Nepal. In a sense Nepal is little different from other parts of the subcontinent, especially in the old Mithila kingdoms of the southern plains (Tarai). But the Newar former kingdoms of the Kathmandu Valley – Kathmandu, Lalitpur (Patan), and Bhaktapur – are particularly significant exemplars of archaic caste systems because the Nepal Valley was never under Mughal or British rule.

Although he does indeed discuss the phenomenon of kingship, and interacts with Dirks and A. M. Hocart, he doesn’t even reference Declan Quigley’s important theoretical work, The Interpretation of Caste. Thus, in my opinion, kingship and the city are not given their due.
Has Guha’s study led me to change my view of caste? Not a lot. But it has broadened it. Guha’s careful elucidation of the ongoing centrality of power in the development of caste society is convincing. In so arguing, Guha is stating that caste is not unique but is, rather, a South Asian example of political realities found in every society, but in a way that previous materialist writers had not managed.
However, Guha makes no mention at all of the ‘climax communities’ of the Kathmandu Valley. I think that is a failing. In so doing he misses the centrality of kingship in those societies. But his central thesis is solid, and I now think such cities must be regarded not as the apex of caste society but as perhaps caste's most complex instantiation.

There are missiological implications to this analysis, but more on that later.
Posted by Mark Pickett at 8:01 AM No comments: