Pastors Get Depressed Too 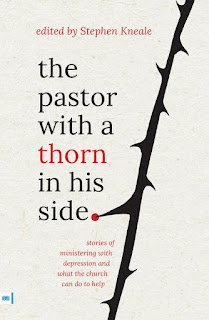 Review of The Pastor with a Thorn in His Side, ed. Stephen Kneale (Grace, 2021, 144 pages, £7.99).
Depression is a reality for pastors just as much, it seems, as it is in the wider population here in the UK.
Stephen Kneale has pulled together six other pastors to join him in telling their stories.
After an introduction by the editor, each of the seven men tell of their experience of depression and share what they found helpful or unhelpful in dealing with the experience. A number of the men are suffering from depression still.
It might seem strange to some readers that pastors suffer from depression. After all, you might think, surely they are supposed to have it all together mentally as well as spiritually. These pastors, however, take the view, which I think is right, that mental illness may be the experience of followers of Christ just as physical illness is, because we live in a fallen world.
Reading the stories of these men is sobering. It is difficult, isn't it, to read about someone harming themselves or even attempting suicide. But that is the reality and we need to face it squarely. This book pulls no punches but tells it like it is.
The authors all write with a very readable style - a product, I guess, of their calling to make truth plain to their hearers and readers - so it is an easy read.
I am a friend of one of the authors and know most of the others in one way or another so I could picture them in their situation. I found their reflections on what was helpful or unhelpful instructive. I never thought, for example, that asking someone suffering from depression "Is there any way I can help?" could be so difficult, but if you are the sufferer it is adding to the burden by giving them one more thing to think about and act on when all their emotional resources are severely depleted.
If I may have any criticism it is that I would have liked to read more analysis of the stories. Kneale's concluding reflections are good but I would have liked more sustained theological, ecclesiological and sociological reflection.
By theological reflection, I mean, for example, on the mystery of providence and the dimension of spiritual warfare in mental health issues. The use of the Bible in counselling is merely touched on and little is said about prayer. Should they have called their elders to pray for them and anoint them with oil (James 5:13-16)? In many parts of the world, churches would find the silence of these matters puzzling. Is it a cultural blindspot for us in the West?
The multifactorial nature of mental illness comes across clearly and should dissuade the reader from simplistic conclusions. However, I think it would have been good to have more reflection on the role of non-physical causes. There is a recognition that sinful behaviour might be one result of depression but is it ever a cause?
Furthermore, though I am pretty sure there is a Reformed consensus among the authors, it would have been good (if that is the case) to state this explicitly because it has a bearing on the interpretation of one's experience and on the options considered valid for management.
By way of ecclesiological reflection, there could be more discussion of the significance of a plurality of elders in the churches in which these men have been ministering. Some of the authors do mention the important role of elders (or deacons functioning as elders) but more explicit discussion of this would have been helpful.
By sociological reflection, I would have liked to see how each man's story is situated socially. Is their church in a residential suburb or a council estate? Derek French tells us about the fact that his house was overlooked from hundreds of windows. Having, I believe, visited that church, I can tell you he is not exaggerating - the church and manse lie in the midst of several Soviet-inspired high-rise blocks of flats. If that is a sink estate, the manse is the plug hole. If I am not mistaken, the previous minister had also had mental health issues. It seems a neglect of the duty of care that the church should allow that situation to have persisted. Ministers need to be able to relax just like anyone else. To be in a situation where one is perceived to be always available to the community (especially in such a needy one as that) is to load a heavy burden on a gospel worker with a sensitive conscience.
No doubt the editor will say that if he had included all that it would be a different book. Fair enough. But somewhere we need that sort of discussion.
You can read more about the book here.
Posted by Mark Pickett at 9:06 AM