Everest in a Fridge

Tobogganing over the weekend with my family I was inspired to take it a step further. I am going to attempt to be the first person to toboggan down Mount Everest in a fridge! The plan is for me to go out to Nepal in March, get acclimatized, then trek up to base camp for a climb in May. I will be shipping the fridge out next week from good old Blighty - Nepal doesn't make fridges and you can't trust the ones they make in China! Clearly this is no small thing. Ever since I was a boy I have wanted to climb in the Himalayas. Now my dream is coming true. There will be an army of porters to get me and all the kit to base camp. And then a crack team of Sherpas will clear the path for me to the summit. Once there I will toboggan back down to base camp using my ice axe as a break! Oh yes, I have forgotten to tell you the purpose of this important project. It is to raise funds for all the poor missionaries who refuse to do publicity stunts in their fund raising. These people just don't seem to get it. It's a dog-eat-dog world out there in the evangelical constituency. In these days of cut backs and austerity, boring old reports of sharing the gospel just don't appeal any more. People need to have their attention grabbed! I am already negotiating a great deal with a Christian publishing company. I will, of course, make a video diary and will be setting up a brilliant web site so you can all follow me. A live web cam cleverly embedded in the fridge will make the experience all the more rewarding. I will, of course, need a huge amount of cash to make this happen so please give generously. Hopefully there will be some left over to give to those poor missionaries I mentioned!
Posted by Mark Pickett at 8:10 AM 1 comment:

The City as Power

More on Harvie Conn's Urban Ministry: The Kingdom, the City and the People of God  (Leicester, Inter-Varsity, 2001).

Chapter 10, The City as Power

Cities are ... provisions of God’s common grace. Through them God restrains the development of evil, blesses his fallen creatures and works out his sovereign purposes in both judgment and grace. The city is an instrument of God’s preserving and preventative grace and an exhibition of our creaturely response to that grace....Cities gather power. (p. 192)

Conn, citing Neal Pierce, asks whether a new form of urban power is emerging with the rise of the megacity in Latin America, the US and around the world. National governments are losing their power to the forces of the city. I think he is right. London is a good example of this. The recently instituted position of a directly elected Mayor has become very important such that its present incumbent is even touted as a challenger for the leadership of the country. On the other hand few other cities in the UK want to follow London’s lead. But then London is by far the most significant city in the UK. No other city comes close in power or influence. This is surely the case with other ‘world class’ cities such as Paris, New York, and Tokyo as well.

Conn discusses the implications of the city as a power, for missions. “In too many cases, evangelical attention to the macro-context of the urban dimension is minimal” (p. 197). The church is sometimes a barrier to urban mission largely because it is often oriented towards rural concerns rather than urban.

But also, says Conn, the city itself can be a barrier to mission. This is especially so in traditionally religious cities where religious institutions are strongly linked to and benefit from the city’s power. This is the case with the rise of Muslim fundamentalism, a strongly urban phenomenon.

On the other hand the city can be a path to mission. The gospel can easily spread from urban centres of influence out into the surrounding area. This was the case in the book of Acts. That has also been the case in post-NT church history. Conn cites the example of the growth of Pentecostalism from its inception in downtown LA to be the ‘largest Christian movement of the twentieth century’ (p. 200).

Conn then discusses intentional strategy as a path to mission, giving the example of the Jesuits with their focus on the urban centres especially in Asia. Nagasaki and Sao Paolo are two important cities that were founded as Jesuit mission centres. The C&MA have had a similar strategy in Lima. Conn reports the emergence of ‘encounter churches’ in highly visible strategic centres that act like ‘flagship congregations’. Such an approach has also proved very fruitful in NYC, London and Sydney, much of it since the book was written.
Posted by Mark Pickett at 4:13 AM No comments:

At the Foot of the Snows

Review of At the Foot of the Snows: A Journey of Faith and Words among the Kham-speaking People of Nepal, by David Watters with Steve and Daniel Watters (Seattle, Engage Press, 2011, 375 pages, £9.43). 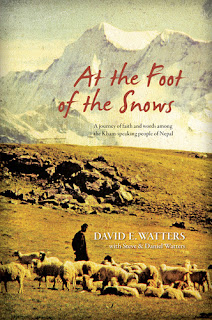 In the spring of 1990 the Peoples' Movement for Democracy ushered in a new era of political and religious freedom to the country of Nepal. I had been out of the country for a year due to what we might call a difference of opinion between myself and the immigration authorities. I was set to reenter when the movement reached its height and the army opened fire on a huge protest killing fifty unarmed protestors. Within 48 hours the king capitulated to the will of the people and a multi-party constitutional monarchy was reinstated. Two days later the border opened and I got on a bus and crossed the border from India. The change of view on the part of the authorities was astonishing. I began planning how we might make the most of that new openness while it lasted and four months later three trucks that were having to leave India were headed up to the border laden with good literature. Up to this time it had been impossible for us to import literature into the country. Now they just waved the trucks through, papers duly signed. One of those trucks stopped off at Duncan Hospital on the Indian side of the border to pick up a box of 400 Kham New Testaments that had been sitting at the hospital for five years waiting for this moment. This book is the story of how that NT was translated, and what a great story it is.

David and Nancy Watters entered Nepal with their three-year-old son Steve in 1969. Daniel was born soon after, while David and Nancy were learning the national language. They had joined a well-equipped team of linguists who had secured a written agreement with the government to map the minority languages of the country, reduce them to writing and establish their grammars and linguistic relationships. Their purpose was to translate the Word of God so that all the peoples of Nepal could read it in their heart language. David and Nancy were led through extraordinary providences to a little known group called the Kham, a people living in the West of the country in the high valleys 'at the foot of the snows'.

The narrative moves swiftly, though perhaps somewhat choppily, through the initial forays into the area, establishing a home in very difficult conditions, identification of a language helper, and the labour of a lifetime in learning the language and translating the NT. All the while, in the background, are the momentous changes going on in the country which came to have a huge impact on both the translators and the people.

This is a story of hardship, discouragement and pain, and faith, endurance and joy. In turn I was moved to tears and elation at the way the Lord led the Watters and answered their prayers, and I have been deeply challenged about my own faith and commitment. This is the best missionary biography I have read in a very long time. Get yourself a copy and have your vision stirred and your faith stretched.
Posted by Mark Pickett at 8:48 AM No comments: