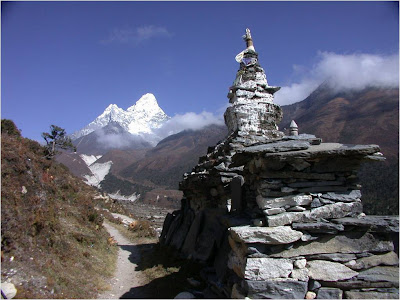 I want to share with you this wonderful photo which I have on my computer desktop. The photo is of a chaitya in the Khumbhu Valley in Nepal with the beautiful Ama Dablam in the background. (Everest is hidden from view - if you need directions, turn right at the top of the valley and keep climbing till there is nowhere else to go but down!) I have never been to this part of Nepal but have had the privilege of trekking in other similar valleys. The photo was taken by my old friend Dr Cheong of Korea.

I love this photo principally because the view up the Khumbhu Valley is breathtakingly beautiful. Ama Dablam must be one of the most elegant mountains in the world. But I love the photo also because of its humanity. The chaitya is an item of funerary architecture seen in many different varieties throughout the Buddhist world.

We can learn a lot about people from the things they make - their material culture. Here are some profound lessons we can learn from this single photo:

Posted by Mark Pickett at 4:00 AM No comments:


Recently a friend said of someone that he had ‘gone native’. That set me thinking. What do we mean by this expression? The phrase is used in a pejorative sense to describe someone who has, in the estimation of the observer, over-adapted to their host community. On reflection, however, I think the phrase is unhelpful at best and sinful at worst, and this is why.

We would never say that a native had ‘gone native’ because, by definition, he was born native (Latin nativus innate, natural, from nasci to be born). If a baby were taken from their native place, say China, and brought up in the UK, likewise we would not say of him, on his growing up, that he had gone native, because he was brought up in the UK and we expect that a child brought up here would behave in a British sort of way.

What of an older child? When we were living in Nepal a blond-haired boy turned up out of the blue in our neighbour’s house. He didn’t talk much and it took a while before we learned who he was. He had been born in Russia of a Nepali father and Russian mother, who had recently died. The father had returned home with his boy who knew no Nepali or English. It took him a while to fit in but slowly, imperceptibly he learned Nepali and adjusted to the way of life. Did he go native? He came to eat like a Nepali, dress like a Nepali and swear like a Nepali. But you wouldn’t expect anything else, would you? If he had kept his Russian ways he would have found it difficult to get on with his extended family and the other kids in school. But people didn’t say he had ‘gone native’ because this expression is reserved for the one who has taken on the life and behaviour of his host community in a way that the observer considers somehow out of place. So it is a moral judgment.

We rightly applaud the one who adjusts his lifestyle to fit into the customs of the community he has gone to live among. But people become very uneasy if an outsider takes on the attributes of a local community to the extent that he begins to really be like them. It makes us uneasy in a way that the outsider who adjusts so far and no further doesn’t, because we can easily see he is still an outsider. We are troubled then by the one who blurs the distinction between ‘us’ and ‘them’. But what if the outsider so identifies with his host community that other outsiders find him odd? Whose problem is that? Did Paul go native when he used his Greek name among the Gentiles rather than his Hebrew name? (A careful reading of Acts shows that he didn’t change his name on his encounter with the risen Christ but that he used his names according to the context he was in; cf. Acts 13.)

Two big issues in the intercultural communication of the gospel are identification and authenticity, but these are often in tension. In order to communicate with those who are different from me I must seek to identify with them. In identifying I have to go outside my comfort zone. I must start making noises that I feel are like idiotic babble—such is language learning. I must wobble my head like an Indian, gesticulate like an Italian, or use chopsticks like a Korean. It won’t feel very authentic at first. But it does fulfil the need to identify. Over time these patterns of behaviour will become habits. Then they will be authentic as well. But those who don’t go so far, who don’t want to identify so closely, will always feel uncomfortable with that level of identification, as also those native people who have moved the other way by identifying with outsiders and adopting patterns of behaviour that are foreign to their natal community. They are saying that if they don’t feel comfortable acting like that then neither should others. So they judge the one who has identified deeply as inauthentic—they have ‘gone native’. But they are not judging the behaviour. If they were, they would judge the native person who behaves in the same way. No, they judge the person, the heart. They are saying that the other is fake. The Lord Jesus had some strong words about that: “Do not judge or you too will be judged” (Matt 7:1).
Posted by Mark Pickett at 8:17 AM 2 comments: