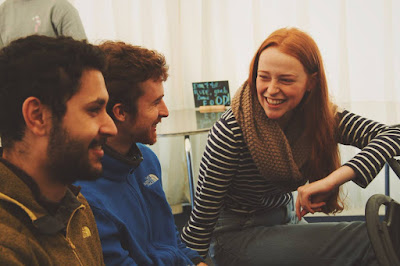 Over the last month I have had the privilege of being involved in two major student events weeks, the first in Reading University and the second in Leeds University. In both I was a guest of the Christian Union ('CUG') and was a member of a team of workers from different backgrounds and from across the evangelical spectrum. I want to share some of my observations and reflections from those weeks.

What a blessing to be in early morning prayer meetings with scores of students enjoying the realities of the gospel and imploring the Saviour to be good to their friends. Seeing hundreds turn up to events knowing that the centrepiece was a talk about Jesus was a great joy. The good news of Jesus was central. The hard questions - Where is God when it hurts? How can a God of love send people to hell? Can we trust a book of fairy tales? etc. - were answered head on, and competently. Miracles were not seen as an embarrassment. The exclusive claims of Christ were not hedged. I had the joy of about a dozen serious conversations in each week. One or two lasted for two hours. I felt that a number of these were deeply affected by the presentations they attended. Many came back time after time. At each week several students filled out cards expressing that they had prayed with the speaker at the end of the evening. And many requested to be included in the follow up course or to go to a church. I was able to introduce most of those that I had had good conversations with to a CU member so that they were able to develop a friendship and continue their exploration of the faith.

The CUs used many creative ways to attract their fellow-students to the events: the venue in both cases was a large marquee right in the centre of campus (Durham CU's experience last year seems to have been a great boost in this direction); wine and cheese; ceilidh; live acoustic music; sandwiches for lunch; full-blown meals for international students. I never felt these tactics were in any way inappropriate. There was no glorification of performers and no one suggested the CUs were tricking students to attend. One Chinese student asked why we put on such meals. I answered, "As followers of Christ we love to give hospitality and we love to talk about Jesus." At one lunchbar I did notice two students eat their sandwich and head straight out. They were by far the exception. The vast majority stayed right through the event; sometimes the formal part lasted over an hour - no mere epilogue here!

The CUs (with good advice from their UCCF staff workers) have clearly become wise in the way they act towards their peers. There is much to commend about this. But I remain concerned that there is a naivety about engaging with those of other religious traditions. Neither of the CUs I worked with put on a hog roast but my son was involved in the event at St Andrews, where they did. How to alienate all the Jewish, Muslim, Hindu, Jain and many Buddhist students. Perhaps there was a vegetarian option but is that enough not to put such people off? I don't know. It would be good to do some research on this; it wouldn't have to be onerous. My hunch is the smell alone would be off-putting for many. But it is not just the food issue. One speaker who shall remain nameless tossed John's Gospel on the floor in the middle of his talk. What is an endearing gesture to one would surely lower the value of the book in the eyes of another. It is not worth it. Speakers also need to be careful not to caricature the beliefs of other traditions. Not all Muslims think alike. Nor do Hindus (Western evangelicals seems to think all Hindus are Advaita monists - in fact hardly any are really). Not all Buddhists are non-theistic.

But it is not just with other traditions that we need to be wise. We live in a culture ourselves as aliens and strangers. But I wonder if our students are conscious enough of that. One morning, I suggested to the CU leader who had selected the ambient music in the tent that Frankie Goes to Hollywood's 'Relax Don't Do It' was inappropriate. He clearly had not thought it important to check out the lyrics. I wasn't listening for the words either, but I do remember that the song was banned on the BBC! Somehow, we need to help our young people to engage with their own culture critically.

Early mornings and late nights (in which sleep was not always easy - intense conversations kept coming back to my consciousness) made for sleep-deprivation. But that is a small price to pay for the reward of involvement in this work. Hats off to those who do two-weeks in a row!
Posted by Mark Pickett at 9:08 AM No comments: