We have two whole shelves of picture books at home. Now my youngest is ten they hardly get taken down and looked at, let alone read. These days it is The Hobbit, Harry Potter, The Hunger Games, The Divide, etc. But we would not want to part with these beloved picture books. They sustained us through many an exhausted bed time. They let our imaginations run wild: we clambering over icy mountains, fought fire-breathing dragons, explored deep dark caverns, and swam through shark-infested waters. Thankfully, we always managed to get back in time for bed. The children enjoyed them too! We learned geography, history, art, mechanics, animal behaviour, and meteorology.

Of course, we read many picture books that were never read again. Some seemed, strangely, to be over much more quickly than the number of words suggested! Once the children were able to follow along they had to be confronted with the grim reality that some books would have been better had they never seen the light of day. Such books have happily been expunged from my memory and certainly do not figure on those two hallowed shelves in the family room. Most of the books that do remain found their way from the West to Nepal and back again. One or two went missing so we bought replacements because we could not imagine life without them. Most have seriously worn dust jackets or plain cloth covers because the dust jacket did not survive the frequent assault of preschoolers eagerly seeking their contents. Some are affected by monsoon mould. One had to be reassembled page-by-page with sticky tape after a frustrated toddler could think of no other way to handle his emotions than to rip up most of his favourite book. These books are loved.

Now it is a curious thing that the United States of America and the United Kingdom are not just two great nations divided by a common language but also two great picture book powers divided by mutual ignorance. Not completely: a few authors get read on both sides of the Atlantic, e.g. Dr Seuss. But it always struck us how very different the children's section of the library in Britain is from that of the States. So I would like to share with you fellow Brits ten American picture books that you may never have heard of and that will leave you and your children in a desperate state of cultural poverty if you do not get to enjoy them together.

Madeline by Ludwig Bemelmans (ISBN 0-670-85187-6 for the 6 story set)
"In an old house in Paris
that was covered with vines
lived twelve little girls in two straight lines."
This has been one of our all-time favourites. I can probably recite the whole book still. We all recite lines when the occasion prompts us, usually in unison. Brave Madeline is the smallest of the twelve. We don't even learn the names of any of the others. In fact we don't even find out why she is even at the old house in Paris. But the sparse context makes the story stand out carried along by its brilliant rhyming. We were given the complete set of six Madeline stories in a single volume. The only difficulty is which one to choose before bed! 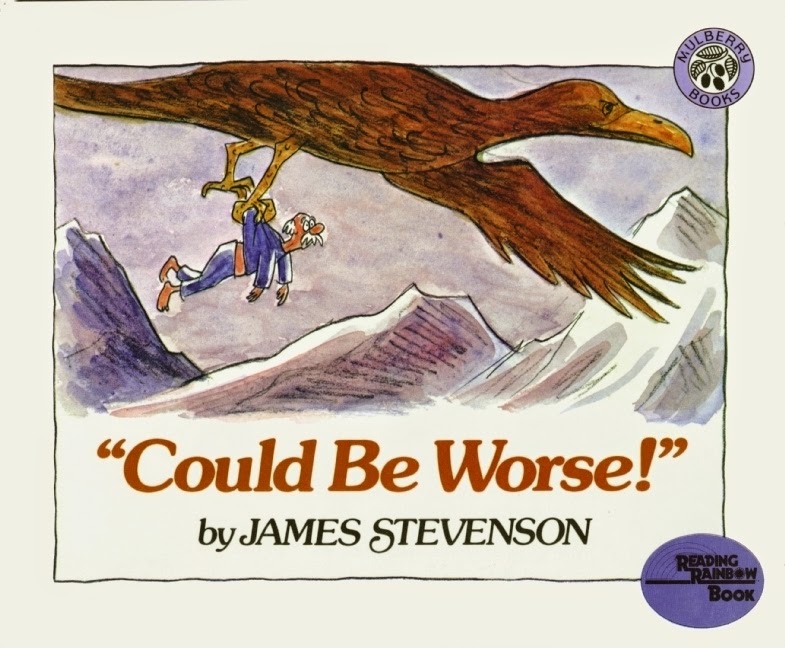 "Could Be Worse!" by James Stevenson (ISBN 0-688-07035-3)
"At Grandpa's house things were always the same...," but Mary Ann and Louie find out that Grandpa's life may not be so boring after all. James Stevenson has a wacky imagination and draws with a sketchy style that belies his artistic talent.

Make Way for Ducklings by Robert McCloskey (ISBN 0-670-45149-5)
A duck's-eye-view of 1940s Boston with a homey story and brilliantly drawn monochrome pictures. I once got two of my girls to copy a McCloskey duckling and still have those drawings. 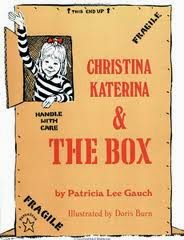 Christina Katerina and the Box by Patricia Lee Gauch, illustrated by Doris Burn (ISBN 0-698-11676-3)
Christina's mother buys a new refrigerator but Christina is much more exited about the box, which becomes, by turns, a castle, a clubhouse and, well you'll have to find out. A celebration of childhood creativity, imagination and just plain fun.

A Big Ball of String by Marion Holland (ISBN 0-00-171318-3)
As with cardboard boxes if you have a big ball of string you can do anything! The rhyming text encourages children to predict the next line and try out rhyming words themselves.

Doctor De Soto by William Steig
Doctor De Soto is a mouse dentist. Being a mouse he refuses to treat animals dangerous to mice. But when a well-dressed fox turns up with a flannel bandage around his jaw the De Sotos decide to risk it. The fox wonders whether it would be 'shabby' of him to eat the De Sotos when the job was done. The question is, Who is able to outwit whom?

Ox-Cart Man by Donald Hall, pictures by Barbara Cooney (ISBN 0-14-050441-9)
A 19th century farming family in New England uses an ox-cart to take their goods to market, where they make the money to buy the things they can't make themselves. Simple story that shows the cycle of the seasons and the value of hard work and thrift. 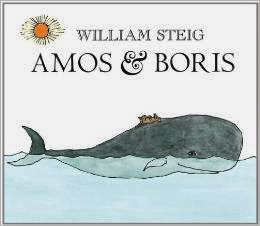 Amos and Boris by William Steig (ISBN 0-14-050229-7)
When Amos the mouse falls off his boat, the Rodent, all seems lost. But as Amos begins to wonder what it would be like to drown a huge head bursts out of the water: Boris, a fellow mammal. Boris rescues Amos but that isn't the end of the story.... Steig has a tremendous way with words. 'Bursting breakers,' 'phosphorescent,' and 'evaded' are not words you normally find in a book for small children but they way Steig uses them they will never feel lost but will have their imaginations expanded. My favourite Steig book. 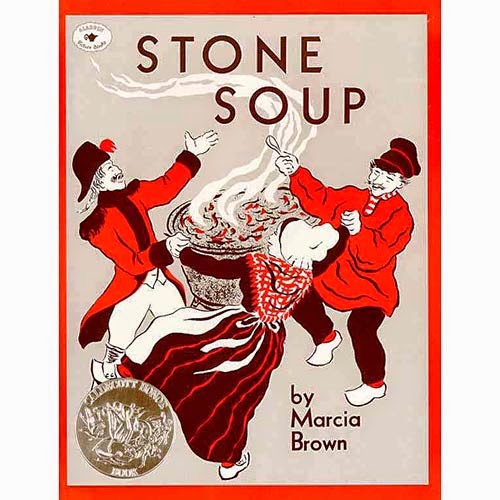 Stone Soup by Marcia Brown (ISBN 0-689-71103-4)
This is a classic retelling of an old French tale in which three hungry soldiers outwit the selfish inhabitants of a village into laying on a feast for them. Children love the clever scheme of the soldiers and mock the folly of the villagers! 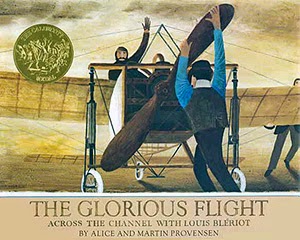 The Glorious Flight: Across the Channel with Louis Bleriot by Alice and Martin Provensen (ISBN 0-14-050729-9)
"The year is 1901. The place is the city of Cambrai, in France." History as it is meant to be - a great story of vision, hard work and perseverance and eventual success with watercolour paintings reminiscent of Ox-Cart Man.

Posted by Mark Pickett at 2:12 PM No comments: