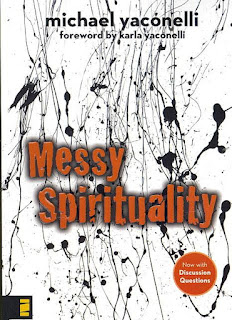 I was visiting one of my heroes, George Verwer, the other day and as I left he gave me a bunch of books and asked me to let him know what I thought of this one in particular. So here are some reflections.

This is Yaconelli’s last book. Originally published in 2002, this edition has a moving foreword by his widow, Karla. (Mike Yaconelli died in a car accident in 2003; he was 61.) The foreword prepares us for what is ahead as Karla draws a picture of the man she loved, ‘warts and all’. And it’s the warts and all that Mike delights in sharing with his readers as they follow his thinking on what it means to be spiritual.

The central concept of the book and of Yaconelli’s approach to knowing God, is that we all need to get real with God. He is sick and tired of phoney religion, which he seems to find especially in American conservative evangelicalism. Karla tells us that, though he had grown up in those circles, a series of life-changing events led him eventually to drop the ‘conservative’ from his identity, “launching him straight into the heart of God’s amazing, inexplicable, and unfathomable grace” (14).

It is also clear, however, as you read the book that the life-changing events themselves were the occasion rather than the cause of his rejection of his conservative roots. The cause, as he declares over and over, in each chapter, was rather the irritation at the unreality he saw around him and the apparent inability of churches and organizations in his circles to cope with the mess he had made of his life.

Out of the pain of rejection Yaconelli offers up a visceral cry to be accepted. He freely acknowledges that he made a mess of his life: “his divorce from his first wife, … the fallout of his divorce on his children, his community, his business partners, and his ministry” as Karla puts it, as well as his “scandalous” relationship and subsequent marriage to her (14).

And so, through eight chapters and an epilogue, Yaconelli argues that real spirituality is messy spirituality and needs to be embraced as such. He is a good story teller and propels his thesis forward with the art of the narrator. He uses story, then, including clips from Jesus’ own life, to demonstrate the shape of that spirituality. But sometimes, ironically, he makes stories up, sacrificing reality, to make a point: I was disappointed to find, in an endnote, that one rather stirring story he tells in chapter 6 is in fact a montage, “not an actual story but a composite” (186).

Furthermore, Yaconelli seems to make messy reality not just an important aspect of true spirituality but the only aspect of true spirituality. And that, it seems to me, is what happens when you base your understanding of spirituality on your experiences, including your experiences of a rather narrow range of Bible stories, rather than on a full-orbed, rigorously biblical theological framework. Many of Yaconelli’s impulses are indeed right: he emphasizes, among other things, acceptance of the broken (chapter 4), the trap of busyness (chapter 6), the significance of faithfulness in the small things (chapter 7), and grace (chapter 8).

Yaconelli rightly locates the central issue as one of desire for God (82). He could have got this from any of the great writers of Reformed spirituality, like Calvin, Owen, Edwards, Packer, Bridges, or Piper, but does not seem to have been exposed to the riches of their writings. It is understandable that he reacted against the community he was brought up in. Some sectors of evangelicalism in the States are shallow and legalistic. Such populist ugliness can be little better than Oprah or Osteen with Bible verses. But I can’t help thinking that he cut himself off from more robust influences that would have been more helpful than Henri Nouwen and John Eldredge. And that is why he can write approvingly of such psychotherapeutic tricks as visualization (76-77) and of elders (called to protect their flocks from wolves who seek to devour them) who keep their pastor in the pulpit for three years while he sorted out whether he still believed the gospel (122).

Yaconelli, like all of us who have tasted that the Lord is good, was a work in progress. Now he is in glory his spirituality is no longer messy. But it is more real than ever before. And that is what we all look forward to even as we “work out our salvation in fear and trembling” relying on the energies of “God who works in [us] to will and act in order to fulfil his good purpose” (Phil 2:12-13).

Posted by Mark Pickett at 1:17 AM No comments: