“Brother John, what should I do? All my life I have received Kija Puja (‘brother offering’) from my sisters on this special day. If I stop now I will offend my sisters and may even be ostracized by my whole family.” Raj had come to John for advice and was in quite an agitated state. Today was Kija Puja, one of the great feast days of the year for the people of Nepal. It was the high point of the festival of Swanti (called Tihar or Diwali among other communities of South Asia). On previous days, successive animals and deities had been worshipped in the homes and courtyards across the Valley: the crow, the dog, the cow, and then one’s own self. Now it was the day for sisters to give an offering to their brothers. Involvement in the rituals of the previous days was to some extent optional, but on this day everyone was expected to be involved.

In common with many communities across South Asia, all married Newar daughters visit the home they grew up in, and where their parents and brothers still live, for this important ritual. Three mandala designs are drawn on the floor in a prepared space in the room, symbolic of the gods Ganesh (the elephant headed god of good luck), Janmaraj (the god of birth), and Yamaraj (the god of death) and a short puja (ritual offering) is given to the deities. The brothers sit on mats along the wall of the room and the sisters draw another mandala in front of each of them, symbolic of the brother himself. The sisters then offer the brothers flowers and fruits as well as bright red vermilion paste (sinha) applied to the forehead as a way of bringing the blessing of the gods to them. The ritual is an elaborate plea to the god Yamaraja to prolong the lives of their brothers. The brothers then give gifts to their sisters in return, usually in the form of new saris and money. When the ritual is complete the whole family sits down and enjoys a feast. The festival is overwhelmingly a family event. In the days that follow Kija Puja the family calls its married-out daughters and nieces and their children to another more elaborate feast.

Raj and his wife Sharmila had been meeting with John for nearly two years and a few months earlier had declared that they were now devotees of Jesus. John had been careful to introduce them to Jesus in the Bible without imposing on them foreign expectations of what discipleship to Christ might look like. As much as possible he wanted Raj and Sharmila to remain in their community so that they would be able to witness to Christ among them.

John was puzzled, however, by this apparent conundrum: to what extent may believers in Christ, living within their community participate in the festivals? Involvement in a festival can take place in different ways. Often a person will participate in the rituals in a merely perfunctory way because he is not religiously minded. Others, however, may take the ritual more seriously. Whatever their motivations and attitudes the important thing was to do the rituals.

John knew that other Christ-followers in the Valley separated themselves from their family during festival times so as not to compromise their new faith. The men never returned to their parents’ home during Kija Puja to honour their sisters. To the sisters it felt as if they did not have a brother anymore, and it caused much grief to the family. Consequently, apart from the many church members who had migrated into the Valley from the countryside, the churches were made up of individual local believers who had broken their family ties.

“Raj, you know the first commandment, not to have any other gods before the Lord,” said John. “Yes, Johnji,” replied Raj (using the suffix ‘ji’ to show honour to his teacher), “but I also want to obey the fifth commandment, to honour my father and mother. Surely I would dishonour my parents and my sisters if I do not participate in the festival!” As they discussed Raj’s options they went over the various rituals that were involved. The puja ritual was not required of the brother but of the sister so he would not have to worship idols, but if he accepted the offering from his sisters was he not condoning their false worship and thereby leading them further into sin? John also knew that other followers of Christ would doubt Raj’s credentials as a disciple if he went along. He might even be disciplined by his church. But the church was made up largely of outsiders who had migrated to the Valley and had no idea about the local festivals and the sort of struggles that believers like Raj went through. Was there anything actually wrong in just participating fully in the whole ritual? It was the heart that was important wasn’t it?

“What if I departed from tradition,” asked Raj, “and rather than receive sinha that had first been offered to the deities, request that a separate sinha paste be made and offered to me as a token of love rather than as an offering of worship? After all, people offer sinha to others on many special occasions, not just at times of worship.”  “But wouldn’t your sisters just think you’ve taken leave of your senses?” replied John. “The Bible says that we must keep ourselves from idols,” he added, quoting from 1 John 5:21. “I won’t be worshipping idols, Johnji,” responded Raj. Then John had another thought. “What about the risk of being afflicted by demons, brother,” he said. “Paul tells us that ‘the sacrifices of pagans are offered to demons,’” he added, quoting 1 Corinthians 10:20. “Yes, but he also said that ‘an idol is nothing’” (1 Cor 8:4), Raj replied. “Oh, what should I do, Johnji? It is giving me such a headache.”

John thought very carefully, and then gave his suggestion...
Posted by Mark Pickett at 6:43 AM 1 comment: 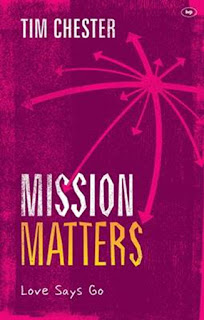 Tim Chester's new book is an excellent introduction to mission. Tim has the gift of writing theology that is both thoroughly biblical and winsomely engaging.

Mission Matters is God-centred because it is biblical and theological. Tim draws his missiology from the Bible by expounding the Bible's grand storyline and showing how mission is first and foremost God's project. "The starting point is this," he writes: "God the Father loves his Son" (p. 17). Mission, then, is at the heart of who God is, in the relationships of the Father, Son and Holy Spirit. It is not first of all what we are to do but what God already does. And because the Son sends us (John 20:21) we share in his mission. Few mission books are as carefully theological but this one is so without being obtuse in its language. It is a great example of writing that is thoroughly Bible-centred and readable.

Tim has written before on the important topic of the relationship of evangelism and social action (Good News for the Poor). He follows the same track here arguing for a broad definition of mission while giving gospel proclamation a central position in that paradigm. Tim's later work (e.g. Total Church) comes through too with an emphasis on the role of the gospel community in mission: "Sustainable Christian evangelism or discipleship or development or social action all require sustainable Christian communities. Without a local church, whatever you do will end when you go" (p. 90). Amen to that.

There is a major problem with a lot of mission writing these days. With the collapse of Christendom there has been a much-needed rethinking about mission resulting in a renewed appreciation that the West is also a mission-field. So mission is from everywhere to everywhere. Churches in the West, then, need to be mission-minded in their posture to the ambient society. In short, they need to be 'missional'. All well and good. But some writers have been so taken with this new paradigm that they have all but abandoned the needs of vast numbers of people who inhabit far less spiritually salubrious locations than, say, the UK. After all, we have neighbours who need the gospel. Indeed, but that is only part of the ongoing story. Tim doesn't fall into this pitfall and argues that mission must be 'Everywhere with the unreached as the priority' (chapter 8). I would have liked to see a bit more on what this means on the ground but the task is clearly stated nonetheless.

Posted by Mark Pickett at 7:32 AM No comments: