Cross-Currents in Muslim Ministry: A Review Article of A Wind in the House of Islam

A Wind in the House of Islam: How God Is Drawing Muslims around the World to Faith in Jesus Christ, by David Garrison (Monument, Col.: WIGTake, 2014).

The House of Islam, Dar al-Islam in Arabic, is “the name Muslims give to an invisible religious 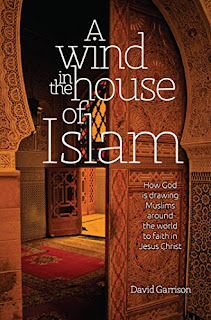 empire that stretches from West Africa to the Indonesian archipelago, encompassing 49 nations and 1.6 billion Muslims” (5). David Garrison’s thesis is that ‘a wind’ is blowing through the house: “Christianity’s re-emergence” from centuries of decline and in many cases obliteration (6).

Clearly by Garrison’s own assertion and from the many stories that are reported, this book needs to be studied by all who have an interest in the progress of the gospel in the Muslim world. If the stories and statistics are to be taken at face value there is an astonishing and unprecedented turn to Christ taking place in many locations and among many distinct communities at this time, for which we should give thanks to God. But such claims need to be critically evaluated rather than simply accepted at face value. In this review article, I want to do just that in the hope that further research will be more fruitful. I will start by outlining the book using Garrison’s headings.

Posted by Mark Pickett at 9:26 AM No comments: