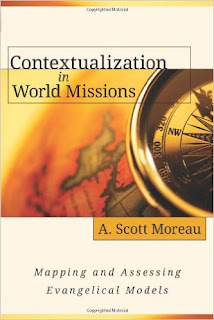 In this volume, Scott Moreau, my former Professor of Intercultural Studies at Wheaton College and editor of Evangelical Missions Quarterly, has analyzed a vast body of literature on contextualization. Moreau’s purpose in this book is to produce an evangelical supplement to Stephen Bevans’s map that outlines models of contextualization across the theological spectrum (1985; 1992; 2002) (13). To do this he takes a phenomenological approach that is descriptive rather than prescriptive (21) and uses the metaphor of mapping to convey his project to his readers. For the most part the author gives attention to missiologists rather than biblical scholars or theologians.

The book is in two main sections with six appendices that show the various maps of contextual approaches and other material to supplement the text itself, and a 48-page bibliography that is a tremendous resource in itself.

In the first section, Foundations for Evangelical Contextualization, Moreau summarizes how scholars map the entire world of Christian contextualization, and zooms in on the values and rules that constrain their work. Moreau quotes his own definition of contextualization helpfully as
the process whereby Christians adapt the forms, content, and praxis of the Christian faith so as to communicate it to the minds and hearts of people with other cultural backgrounds. The goal is to make the Christian faith as a whole—not only the message but also the means of living out of our faith in the local setting—understandable. (36)

In the second section, Mapping Evangelical Models of Contextualization, Moreau analyses 249 evangelical models of contextualization by focussing in on two criteria: the method used and the role of the initiator in that approach. In this way the 249 disparate examples in Moreau’s survey are arranged in 30 categories. Evangelicals, for the purpose of this work, are those who self-identify as such, rather than those who meet certain confessional standard.


None of these is particularly surprising but all most interesting. A second edition in, say, ten years time would give the author the opportunity to reflect on whether these have been realized.
Scott Moreau has put the evangelical missions world in his debt through this masterful survey of in-house opinion on this most significant and tricky issue. He has corralled a vast quantity of data into manageable categories for us to examine. Although he does venture to take pot shots at various ideas or practices, he has left the evaluation largely to the reader. This is understandable given the enormous field he has undertaken to survey. The breadth of models clearly reflects the latitude with which the label evangelical is used today. I suspect a more robust, confessional definition would reduce the number of models under consideration.

The book will mostly appeal to those who are wanting to reflect in a sustained way on evangelical approaches to contextualization and will be heavy-going for the average reflective-practitioner. I will be working my way through his bibliography for years to come and returning to this volume when I want to know how a particular actor or method or viewpoint fits into the grand scheme of things. I hope that in future editions the numerous typographical, formatting and other errors that I found will have been ironed out.
Posted by Mark Pickett at 3:50 AM No comments: