I have once again had the privilege to be involved in student ministry over the past month, first in Cambridge and then in Aberystwyth. Here are some observations and reflections now that I have recovered!

1. Student ministry is fun. I know that that is not the highest virtue but it really is fun to be around students and experience their energy and enthusiasm in seeking to share Christ with their fellow students. I was going to say friends but if each student who is a disciple of Christ were to witness to their friends only, a huge chunk of the student body would be left out. Which brings me to my next point.


2. Student ministry is exhausting. I went out with the students each morning to hand out flyers on campus. Most students accepted a flyer (in marked contrast to the way the general public react on the High Street) so this was a key way to publicise the events of the day and week. It was good to see the students go out of the comfort zones and invite passers-by to events. Posters, social media, and flyers all work hand-in-hand reinforcing the message that has to compete with a thousand other messages in order to be heard. The most effective method of getting people to events, however, once again proved to be personal invitation. It is great to see students bringing class-mates along. Some seemed to bring along different friends every day - very impressive. The great advantage of a week of events is the continuity that it enables. Though numbers picked up during the week, as usual, it was amazing to see the same people come back again and again. Some Polish students at Aber came to every one or nearly every one of the events! The intensity of the week, however, can't be sustained throughout the year - the students do have other things to do after all! But the efforts leading up to the week and the follow-up events going on in subsequent weeks all combine to maximise the opportunity that the week brings.

3. Student ministry is people ministry. Students are human, after all, created in God's image and fallen and on a highway to eternal judgment without a gracious intervention by the Holy Spirit. The stakes cannot be higher. It was lovely to see in the corporate praying and in the effort expended each day that there was a sense of urgency. This is something we all need challenging in regularly.

4. Student ministry is Word ministry. The message of Jesus, that is central to the Bible, came across clearly and winsomely in both weeks. It was a joy to hear the claims of Christ proclaimed so publicly and unashamedly. These were no mere thought for the day; some talks were an hour long and the students listened attentively. Not every preacher could pull that off but I never noticed anyone yawning out of boredom. When the gospel is preached faithfully, clearly, creatively, and warmly it connects.

5. Student ministry is fruitful ministry. There were professions of faith in both weeks. I personally talked with two young women who told me that they had asked Jesus to be their Saviour the night before. One had questions! So we chatted over a cup of tea in the adjoining cafe for an hour. Though she had little exposure to the truth before, she had been invited to church and CU by her new friend back in October as a fresher and had been going ever since. It all became clear to her in the previous evening's event and she had committed her life to Christ. Such a joy to hear her story and help her sort out further questions.

6. Student ministry is conflicted ministry. I am going to be critical here. It was encouraging to see some churches praying earnestly and supporting their students in their joint effort to their peers. Some churches released half their staff to help out for the week. But apparently not all were so positive about the week's events. I was deeply disappointed to discover that one church continued their weekly student seeker group on a night that Michael Green was preaching just down the road. Another, too, had a notable outside speaker for an event that would have been so much better timed if it were a week later. If you are responsible and happen to read this drop me an email. I want to talk.

7. Student ministry is sensitive ministry. There are so many messages out there in our culture and on our campuses that shape students' minds. When they encounter, for instance, the exclusive claims of Christ, it is bound to produce a reaction. This brought to me again the importance of being alert to their sensitivities. I have much to learn in this area. Certainly those involved in full-time in student ministry are much more attuned to these sensitivities. It was a joy to work with the main speakers (as last year, Michael Green, Lindsay Brown, and Michael Ots) as well as UCCF staff (William Zong, Mike Hood, and Rachel Ward) and student-focussed staff from local churches. I learned from them all. But I will continue to bang on about our global insensitivity to those of other religious traditions. Why, oh why, do we come across as promoting 'Christianity'? Many would not see an issue with this. Surely it is good to be clear about what we believe in contrast to what we do not believe and using the terms Christian and Christianity are a useful shorthand for our position. If that were all it was then I would happily keep quiet. But I think that that is not what is being heard by the majority of Muslims, Hindus, Jews, Buddhists, Sikhs and others. It was quite striking how few visitors were from other religious traditions. Yes, we had quite a few Roman Catholics, so clearly it was not being promoted as in-your-face Protestantism. But even here there was sometimes a lack of clarity - 'So are Catholics Christians or not?' I answered, 'Well, it depends...' and several of us spent hours going over the issues. But I think the issues can be clarified from the front too. I am not sure this was done as well as it might have been. And the notable non-attendance of Muslims, Hindus and Buddhists? I definitely met some on campus. But very few came along. I think there is a serious disconnect. They think these events are not for them. We think they are. But we are not getting that across.

Posted by Mark Pickett at 6:13 AM No comments: 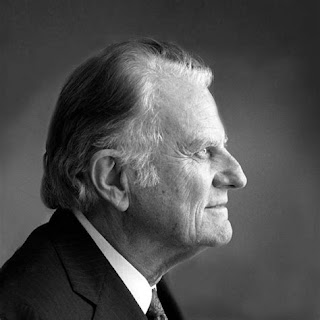 I have just sent this off to Wheaton College to go into the book of condolences to be presented to the family of Billy Graham (lightly edited):

My wife Becky (WCGS '92) and I would like to express our profound thanks for the life and ministry of Billy Graham. We are thankful for his humility, his consistency of holy living, and faithfulness in gospel proclamation. His life is a wonderful example to us all. I was a Billy Graham International Scholar in 1992 doing the MA in Intercultural Studies. It was tremendously helpful for my wife and me when we returned to our field of ministry in Nepal in 1993, where we stayed until 2005. Since then we have continued to serve in Wales, UK, where we are involved in many areas of ministry including work on campus, from where I write this note, late at night after a full evening of gospel proclamation and counselling.

May the Lord comfort you in your loss with his warm presence. And may the Lord find us all faithful in our day, just as your beloved father, grandfather, mentor and friend was in his.

So Spirit, come put strength in every stride,
Give grace for every hurdle,
That we may run with faith to win the prize
Of a servant good and faithful.
As saints of old still line the way,
Retelling triumphs of His grace,
We hear their calls and hunger for the day
When with Christ we stand in glory.
Stuart Townend & Keith Getty